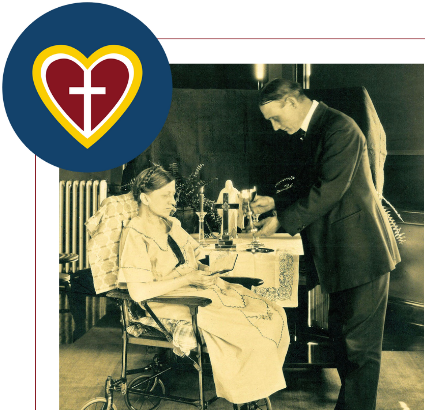 At the turn of the 20th century, Pastor William Rader took a walk one Sunday afternoon and decided to visit one of the institutions on the Milwaukee County complex in Wauwatosa. The grounds contained a hospital, tuberculosis sanitarium and a facility for people with mental health problems. After observing the residents and questioning the staff, he found that no one was ministering to the patients' spiritual needs. Pastor Rader was moved and concerned for the souls of those forced to live for months (and sometimes even years), in a hospital or institution. He began visiting various institutions in the Milwaukee area and later rallied the support of Milwaukee area churches to adopt the ministry efforts to the institutionalized as a local, extra-synodical mission of love to the afflicted.

In May, 1901, the Lutheran Institutional Mission (which later became known as Institutional Ministries), was founded for the purpose of meeting the spiritual needs of those who were institutionalized, particularly those who were unchurched. The fledging ministry called its first full-time chaplain, Pastor Enno Duemling, beginning in May, 1902 and that ministry continues today with God's blessings.

The ministry grew steadily through the early years until it was able to add a second chaplain in 1926 and then, in 1938, a third full-time chaplain. In the ensuing 50 years until 1989, the ministry operated with either two or three chaplains until it was able to consistently support three pastors. In 1998, ministry merged with other institutional ministries in both the northern and western Wisconsin districts of the Wisconsin Evangelical Lutheran Synod (WELS), adding three additional chaplains to the staff, to form a larger and more geographic ministry to the institutionalized. Today, our staff of 5 full-time chaplains and 2 part-time, manages this ministry throughout Wisconsin, northern Illinois and Indiana, and with God's help, will continue to expand this outreach effort to more and more of Jesus' "others sheep" —​ shining the light of Jesus’ love behind the walls!

“To share God’s law and the saving Gospel of Jesus Christ with all individuals who are or have been institutionalized, and their families.”